Options for Straight Teeth in Cardiff 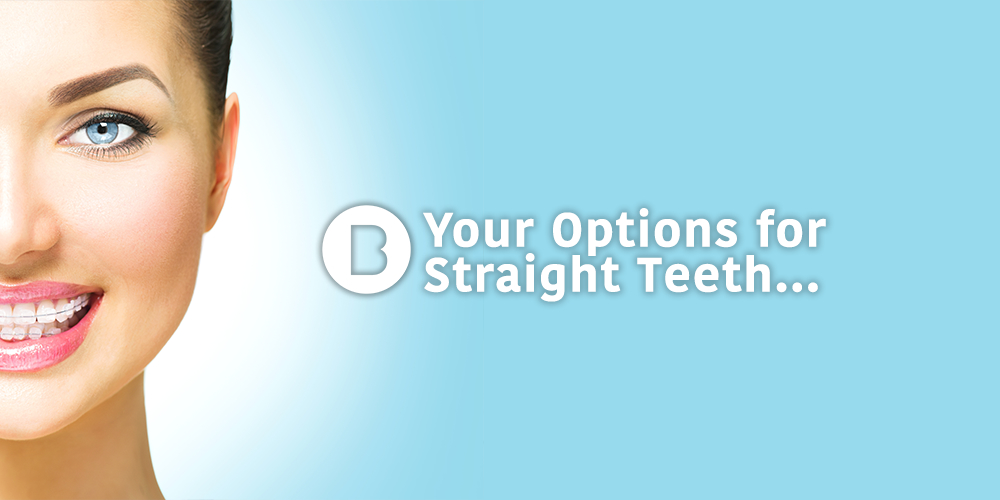 Obtaining straight teeth nowadays is something that can be achieved in a relatively short period of time due to the constantly improving and changing orthodontic treatments, however, this means that there is an abundance of different options for straight teeth. Bamboo Dental offers four different types of orthodontic treatment, each with their own benefits that can be explained to you by Dr. Dan or one of the other dentists at Bamboo Dental if you come in for a free consultation. Here they are:

The first option for straight teeth at Bamboo Dental is the Six Month Smiles orthodontic treatment, this treatment straightens teeth in such a short period of time (average time of six months) because the appliance changes the cosmetic appearance of the teeth only, rather than the change of the bite that can take conventional braces up to 2 years to complete. The Six Month Smile appliance is hard to notice as the wires and brackets match the colour of your teeth, meaning that during your treatment you will have no problems showing off your smile, unlike other types of braces, such as conventional metal braces, that make patients feel self-conscious.

The Invisalign treatment is another near-invisible and fast treatment. It uses clear, removable aligners that are replaced every two weeks that make small increments to your teeth as the aligners are replaced until you achieve your desired smile. The benefits of this treatment are the short treatment time (usually 12 months, depending on the level of adjustment required), the convenience of use, such as the ability to remove the aligners whilst eating and during special events and finally the fact that they're nearly invisible, meaning you won't feel self-conscious wearing them.

The Smilelign aligner is a removable, clear appliance that is hardly noticeable - people won't even know you're having your teeth straightened. The Smilelign aligners are similar to Invisalign in that new aligners are sent every two to four weeks to the patient, making small adjustments to the teeth every time a new set of aligner is sent. The aligners are made to be as thin and comfortable as possible as they are hand made, and any minor speech issues or discomfort you may have will last just a few days. The F.A.Q section on the official Smilelign website answers any questions you may have about the treatment.

Tom, a 25 year old teacher from Cardiff came to Bamboo Dental for a free consultation after hearing about the options for straight teeth offered by Bamboo Dental. As a teenager, Tom had fairly crooked teeth and was given metal braces under the NHS. Due to how crooked his teeth were, Tom had metal braces for just under two years, he hated that for the entire time he was self-conscious about his smile due to how visible the metal braces were. When Tom had his braces removed, he was pleased with the results and was given clear, removable Essix retainers. For years, Tom Wore the Essix retainers to make the results permanent, however, as he got older and went to university he forgot to wear the retainer as much, which caused his teeth to shift back to their original position. By the time Tom had finished university, his teeth had shifted so much that his Essix retainers did not fit anymore. After a few years, Tom's teeth had shifted back so much that he decided that he wanted orthodontic treatment again to straighten his teeth. He asked his colleagues at his school where he taught and was referred to Bamboo Dental. Tom did some research and found the various options for straight teeth. He decided to give Bamboo Dental a call, who advised him to come in for a free consultation so Dr. Dan or one of the other dentists could talk more about his preferences and goals so they could recommend a suitable treatment for him. Tom wanted something that would take under 12 month from start to finish and something that is discrete so people wouldn't notice; he was recommended the Invisalign treatment as it fitted Tom's preferences. Tom decided to go ahead with the Invisalign treatment after weighing up his options and booked in for treatment.After 12 comfortable months of wearing the clear Invisalign aligners, Tom's teeth looked as good as ever, and he was given a new set of Essix retainers to ensure his results were permanent. Tom was ecstatic with the results and said "The Invisalign treatment has helped me so much by straightening my teeth in such a short period of time, the fact that the aligners were near invisible meant that nobody noticed I was wearing them which was huge for the profession I'm in," he also joked that he would never again forget to wear his retainers again.

Due to the number of options for straight teeth, it is important that you sit down with a professional. Dr. Dan, the head dentist at Bamboo Dental offers a free consultation to all new enquiring patients, who can advise you on which of the options for straight teeth is suitable for you based on your current positioning of your teeth and what your goals are in achieving a new smile.