Imagine every trip to the dentist feeling like a walk in the park - but maybe not quite how you think. Long gone are the times of looking up at the dental surgery ceiling with anxious tingles as the dental instrument enters your mouth. Now you could be in a place of calm with the lapping waves moving along the white glistening beach. All thanks to virtual reality. 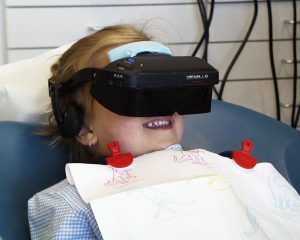 Is Virtual Reality the Next Big Thing for Dentistry?

The BBC has reported that UK scientists have conducted studies that show support for virtual reality in reducing anxiety levels in dental patients. UK scientists found that putting patients in a virtual reality (VR) environment while being treated can reduce anxiety levels. The scientists tested different types of scenery in the virtual reality experience given to the patients. They found that whichever scene the patient was placed into did make a difference to the overall anxiety levels. For example, those who were placed in a beach setting saw a decrease in anxiety where as those placed in more of an urban setting didn't see a significant reduction in anxiety.

What Has Been Used So Far?

Dental phobia has been prevalent for as long as dentists have been around. That's not surprising since the first dentists were often also blacksmiths and cobblers. Over the years many methods have been tried to help reduce the panic stricken patients entering the surgery. Some of the most used methods include tv screens on surgery walls and even the option for the patient to plug in their own music to listen to. There was even a dentist who successfully distracted patients way from those nervous tingles by sticking a Where's Wally poster on the ceiling of his dental surgery. We discussed a range of anxiety reducing methods in a previous article. It seems that distraction is a very worthwhile method in reducing dental anxiety. However, until now there has been nothing quite so distracting as virtual reality. Moving away both visual and auditory senses can really make a huge difference to how your brain perceives your time in the dental chair.

What Can You Expect?

As you enter the dental chair you'll likely be handed a virtual reality headset. From there a selection of environments are at your fingertips. The glistening, sun kissed beach, a calming zen garden or a peaceful countryside location could be some of the options available to you. What would you pick?