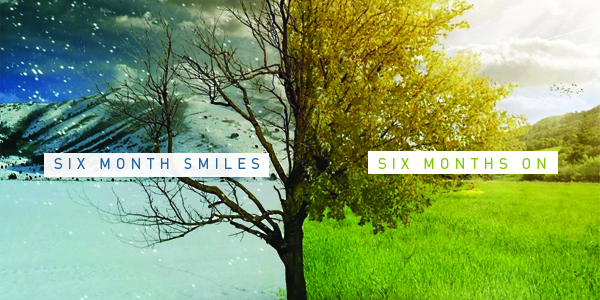 The most rewarding aspect of working in the dental industry is seeing the journey and transformation our patients go through. Our dentists, hygienists, receptionists and dental nurses all get to know our patients, from the minute they walk through the practice doors, up to the point they leave with the smile they've always dreamed of. This is especially true for our Six Month Smiles in Cardiff patients. Dr. Dan, who performs the Six Month Smiles in Cardiff treatments, discusses with patients in the very first consultation what their end goal is. Dr. Dan promises to deliver straighter white teeth in six months and sets out from the beginning how that end point will be reached in a list of stages. We're overwhelmed and grateful by the number of patients who ask to leave us testimonials, especially Six Month Smiles patients. We thought that this month, we would share another testimonial with you fromAdam who both decided to get the treatment done after a pay rise at work.

No one in our family has had particularly nice teeth. In fact, bad luck with teeth runs in our family. I had braces when I was younger, but I never wore my retainer after I had them removed, so my teeth slowly started to move back. I was in the year above my brother at school, and I remember my friends used to say how my brother and I both had the same teeth. By telling me we both had the same teeth I knew they mean't we both had wonky teeth. Both me and my brother had teeth facing in the wrong direction. In fact, my orthodontist once told me that mother nature had been unkind with me when she was handing out teeth. For a 12 year old, those were pretty harsh words to hear. However my teeth got straighter, and I was delighted when my braces were taken off. It only took a couple of years for a few of them to move back though. I didn't wear my retainer because it made my teeth really sensitive.My mother told me how it was a waste of time taking all that time off work to take me to the orthodontist. Only now in hindsight do I wish I'd just worn the bloody thing.

A year and a half ago, I started considering getting private treatment. I'd been promoted at work and I thought that fixing my teeth would be something meaningful I could spend the extra cash on. I did my research and Bamboo Dental was the practice I chose to go with. I'd researched alternatives to train track braces because I'd been through that once before. I discovered that Bamboo Dental did Six Month Smiles in Cardiff treatments and that Dr. Dan was a leading figure in offering this treatment. What I like about the Six Month Smiles treatment is that they're very discreet. Even though it's a fix brace, they don't look like the classic silver coloured ones I had at school. You can barely even notice them on teeth. I also was sold on the fact that you could have them off in six months. My mind had been made up so I gave the practice a call. The free consultation with Dr. Dan was great. He was really helpful and any questions I had he answered. He talked me through how Six Month Smiles was different to other straightening systems. He explained how the discreet nature of the braces, along with the speed and comfort, made them revolutionary in the teeth straightening game. Dr. Dan was clearly passionate about Six Months and that gave me great confidence in him. I didn't originally want anything stuck to my teeth, and I had been toying with the idea of Invisalign, but the speed of the treatment wasn't something I couldn't ignore.

My experience with Six Month Smiles in Cardiff was really positive. I regularly saw Dr. Dan who tightened the wires a little and made sure everything was going in the right direction. Each time he tightened the wires, it would take a little getting used to. It didn't hurt but it felt strange the day after each time he tightened the wires. Other than that, I experienced no discomfort with the treatment. I had to be careful with what I ate, but Dr. Dan gives you clear instructions regarding the do's and don'ts when you start the treatment. If you listen to the boss, you can't go wrong. My friends would always tell me that it was like I wasn't even wearing braces. They were that unnoticable. The six months flew by. I had to get used to brushing with the brace, but other than that there was no major upheaval with having them on.

I still will never forget the moment I had my braces taken six months later. I couldn't believe how straight and white my teeth were. Dr. Dan whitens your teeth at the end of the process which is a lovely bonus. There was no way that I was going to let them my teeth move back again! I told myself that I was really going to look after my teeth this time. Six months on, and I've stuck to my word. I've been taking great care of my teeth. I brush better than before, I floss more, and I wear my retainer at night without fail. I even eat a little better! I'm so grateful for Dr. Dan for all his hard work - and I'm delighted to have found Bamboo Dental who offer such a revolutionary treatment. I really would recommended it to anyone. It's just six months of your life and it flies by. If you, like Adam, are considering Six Month Smiles in Cardiff treatment, or any other teeth straightening treatments, please contact us by calling 02920 569769, or message us on our contact form here. A member of our team will get back to you as soon as possible.