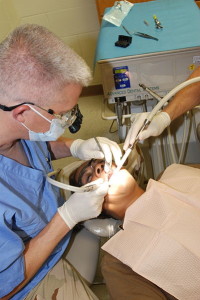 Can you remember the last time you visited a dentist in Wales? New figures have shown that almost half of the Welsh population did not receive any form of treatment from NHS dentists over a two-year period. Statistics released by the Welsh Government revealed that 54.7% of the population or 1.7 million patients received dental treatment from the health service in the 24 months to March 31, 2014. More than a third of children were not treated by the NHS, with just 64.6% of those under 18 having had dental treatment in the same time period. In response to this Bamboo Dentals, Head dentist Dan Rogers told Radio Cardiff that More funds are becoming available to enable patients in Wales to have dental treatment on the NHS. Unfortunately, there aren't any funds available to take on NHS Patients at Bamboo but we can take on private patients so by hosting an event to check patients mouths for free on behalf of the Mouth Cancer Foundation Charity allows me to give something back to the community and help to win the fight against mouth cancer. Dan added that he is passionate about dental education and has been visiting local schools and giving children lessons on how to look after their teeth as part of an education plan he is currently putting together. The Cardiff based award-winning dentist will also be carrying out free mouth cancer checks on Saturday, August 30th, at Cardiff Bay Retail Park on behalf of the Mouth Cancer Foundation. Dans team of tooth fairies will be waving their magic wands hoping to educate the public as well as host a raffle where there are plenty of prizes available supplied by business in Cardiff, including Cardiff Bay Retail Parks Boots and ASDA, and Kathryn and Phil Edwards from Studio 87 Photography. If you haven't visited the dentist in a while and you are a smoker or are worried that you might have mouth cancer, make sure you come along and get checked out. Alternatively, why not just come along and find out more about mouth cancer and take part in the raffle.