The growth in popularity of cosmetic dentistry in recent years has been nothing short of incredible. More and more people each day are understanding that the appearance of their teeth is not only vitally important but something that they do have complete control over. It is now very easy to correct almost any ailment of the teeth whether it be discolouration, crookedness or even if you they have all fallen out! 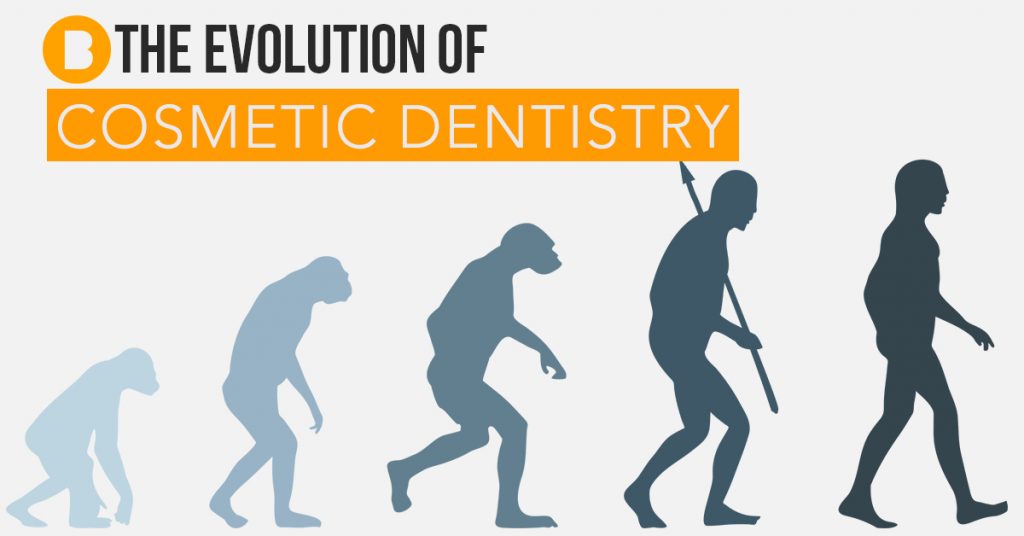 Cosmetic Dentistry: It's on everyone's lips

The advancement in cosmetic dentistry treatments has been necessary to fill the demand for a population of people more focused on looking their best. However, there was still a demand for aesthetically pleasing teeth centuries ago and that means that there was an industry too. Let's have a loot in more detail at the progression of specific treatments involved in cosmetic dentistry.

Teeth Whitening: Then and Now

We can go all the way back to the Ancient Romans to find the birth of teeth whitening. They saw it as a sign of wealth and would go to great lengths in order to achieve a white smile. Their teeth whitening experts put together a mixture consisting of urine and goats milk amongst other ingredients. These ancient whitening staples were cooked up in a special paste that was applied to the teeth and left to work its magic. As we entered the 17th century, the act of teeth whitening moved from a DIY set up and into more of a service industry, if you can call it that. The unlikely providers of said service were the humble barbers who saw a gap in the market to whiten your teeth whilst giving your hair a trim. Many years later dentists began to use hydrogen peroxide as the key ingredient in their solution to whiten teeth. This is still used today. There was always an issue of how to get the solution on to the teeth. This was generally done by painting the teeth until a form of bleaching tray was invented that would sit over the teeth holding the solution onto the tooth surface. In more modern times teeth whitening procedures have been refined and advanced with new technology. Trays are still a very popular choice due to their ease of use, however, we have now started to use special laser technology in our whitening efforts. This involved the use of LED lighting to activate the whitening solution and wrks very effectively.

The Road to Straighter Teeth

Teeth straightening stretches all the way back to the Ancient Egyptians. Incredibly, archaeological digs have uncovered mummified bodies with metal contraptions in their mouth. In the 18th century, a man named Louis Bourdet wrote a book titled, The Dentist's Art. This had an entire section devoted to the technique of tooth alignment and was the first literature discussing the option of removing a tooth in order to make space for the alignment of others. As cosmetic dentistry progressed through the years we saw the introduction of metal braces and fixed braces that used elastics to put a constant pressure on the teeth. The next big development after this was the addition of x-rays to the orthodontists armoury. This use of x-rays in aiding teeth straightening was pioneered by Eugine Talbot although it only became common practice towards the middle of the 1900's. The 1900's was where cosmetic dentistry really started to grow. First a classification was invented for the course of your teeth. This innovation allowed orthodontists to clearly describe the direction that a tooth was moving in and how much corrective treatment it would need to move it back to the optimal position. In the meantime, an idea had been circulating the cosmetic dentistry world - brackets. The concept of using brackets on the teeth to help move them into the right direction was held back by just one thing. A lack of a safe and suitable adhesive to fix the bracket to the teeth with. This problem was soon solved and the fixed train-track braces that you see today started to be used. In more recent years the speed and the aesthetic appearance of braces has become increasingly important.Invisalign took centre stage with it's nearly invisible solution to teeth straightening. The system uses a series of see through aligners to gradually straighten teeth. The only downside is that the time involved in this system is still much longer than many people would like. This is where new concepts such as Six Month Smiles have cornered the market. Their brace can straighten teeth in six months (often less) and although it's appearance is discreet, it is not as invisible as Invisalign. This has presented to sides to the teeth straightening market that people now have the option to choose between - speed or appearance.

One of the most vital areas of cosmetic dentistry is tooth replacement. After all, what use is making a tooth whiter or straighter if you don't even have one. The goal of effectively replacing teeth has been prevalent since Ancient times where old animal bones were often carved into replacement teeth. During the early 16th century, Japan was home to the first set of wooden dentures. These were commonly used throughout that time. There is even a myth that George Washington was the proud owner of a set of wooden teeth. Dentures are still used today, although they much more closely resemble real teeth. However a more robust and all round better alternative is beginning to peak in the industry. That is, dental implants. These implants are a form of small titanium rod that is placed in the jaw bone where the tooth root would originally be. Your crown is then placed on top of the implant. The result is a tooth that looks, acts and feels just like a real tooth without the added annoyance of having to glue these into your mouth as with dentures. Cosmetic dentistry has come a long way over the years and it is exciting to see where it may be heading. A new technology that is starting to cause ripples in the industry is the use of 3D printers. Could your brand new teeth be printed out at a dental clinic near you as some point in the future?