Emma: How Digestive Biscuit Nightmare lead me to Bamboo 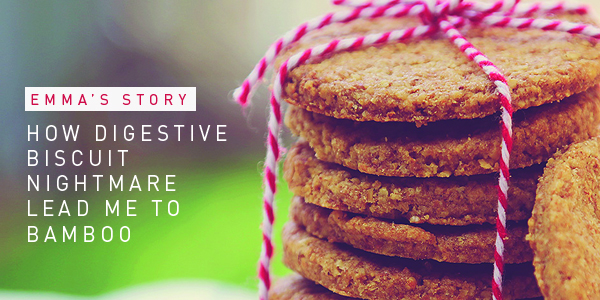 For many, eating biscuits is a pleasure. For many its a hobby. In a fast moving world, we adapt our diet around our lifestyle and work routine. Whether it's picking up a coffee and croissant before work in the morning, or whether it's picking up a sandwich at lunch, restaurants, bars and cafes have adapted to our ever changing lives. Were busy people, and we don't have as much time as we used to in order to sit down and enjoy a treat. When was the last time, you sat down with a snack? Were not talking a takeaway, or even a ready meal. Were talking about the last time you made time for you to sit down in between meals and treat yourself to something naughty. Ok, were dentists and we shouldn't be saying this, but lets be honest, all of us like a goody or two every now and again. We cant remember the last time we had a chance to sit down with a coffee and a slice of cake. So you can imagine the horror that Emma, a receptionist from Barry faced when she got more than she bargained for sitting down with a digestive biscuit and a cuppa.

People still don't believe me. Emma reveals. The mum of three has kindly called Bamboo up to reveal her unusual biscuit emergency. Its not funny. I shouldn't laugh. But you have to see the funny side of it. Emmas got the giggles. It was my day off. My first day off in over a year. I work as a receptionist for a vets. I love animals. I have a spaniel called Terry. I didn't name him; my four year did. God knows why he chose Terry. My son was at work, and I had Magic FM on. I like that station as it plays all my favourites. Kim Wilde was hosting a show and one of the Motown songs came on. Id just finished cleaning my bathrooms and the thought of a cuppa was the only thing getting me through. I wont lie, Id been hesitating whether or not to raid the biscuit cupboard or not. In the end I thought sod it. So I was in there quicker than Terry chasing a bone. All we had was digestive biscuits and bourbons. I don't like bourbons, they're my fellas favourite. So I took two digestives and brought my cup of coffee into the living room.

Dental Emergency on a Day Off

Ain't No Mountain High Enough was playing. I love that one. I was bopping my head. I took a bite into my biscuit and one of my top teeth on the left literally cracked into two. I couldn't believe it. Ive still got the half that snapped off. I thought to myself, bloody hell what am I gonna do now! Two types of people take all my money and thats vets and dentists. I should know, I work at a vets! Anyway I wasn't going to leave it as it was, it looked daft. To tell you the truth I was so embarrassed. How was I going to keep a straight face telling them I couldn't eat a biscuit. I called up my dentist and they couldn't slot me in until a week. I was furious. Id been going there for ten years and they couldn't fit me in for a same day appointment.

I decided to give Bamboo a call. Id seen an advert on Facebook for them the week before, saying they did Emergency Dentist in Cardiff appointments. I called up and got an appointment the same day. It wasn't how I wanted to spend my day off but these things happen. When I arrived, Bonnie was at the reception and she was absolutely lovely. She asked me if I wanted a tea or coffee and I told her as long as no biscuits come with it! She asked if I was watching my weight, and I said I was watching my wallet! We had to laugh about it. I filled out the new patient form and honestly, Dr. Dan called me in less than a minute later. Dr. Dan, what a nice man. He puts you at ease, he tells you a joke. He's friendly. He gave me a filling to fix the tooth. I was in and out in less than ten minutes. He told me had heard some crackers of stories over the years but this was one of his favourites. I don't think he even believed me it was a digestive that had caused this damage. I told him that this was going to be the most expensive biscuit Id ever eaten.