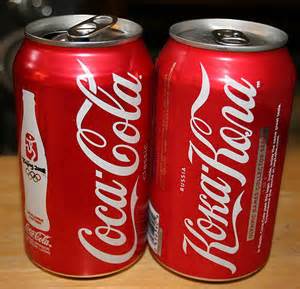 The global brand Coca Cola is one of the most popular drinks in the world and an official sponsor of the FIFA 2014 World Cup. The drink has become a household name and is popular for its glamourised television adverts, such as the diet coke advert showing a man with a six pack - leading many viewers to believe that drinking diet coke will give them a healthy looking body - and for its Christmas holidays advert. Thousands of bottles and cans are sold daily and many people don't even give it a second thought on how it affects their teeth. With recent reports showing the number of children in the UK suffering from tooth decay its even more important that adults and children are aware of how much sugar is in the foods and drinks that we consume and how too much sugar affects not only our dental health but also our general health. Recent findings suggest that if too much cola or other drinks containing phosphoric acid are consumed, this can reduce your calcium levels. Many nutritionists advise that Coca-Cola and other soft drinks can be harmful if consumed excessively, particularly to young children whose soft drink consumption competes with, rather than complements, a balanced diet. Studies have shown that regular soft drink users have a lower intake of calcium (a lack of which can contribute to osteoporosis), magnesium, ascorbic acid, riboflavin, and vitamin A.

Bacteria that live inside your mouth eat sugar, producing acid as a result. The acid in soft drinks such as Coca Cola can damage your tooth enamel around the bacterial colony, allowing the bacteria to move into the eroded areas, eventually leading to cavities and possible tooth decay. It only takes about 20 seconds for bacteria to produce acid but the effects can last for up to 30 minutes.

Soft drinks such as Coke and even Diet Coke contain phosphoric acid, an acid that is used in industrial cleaners. Erosion from phosphoric acid affects the entire tooth, unlike localised erosion that leads to cavities. Symptoms of dental erosion include temperature sensitivity, pain, and transparency, cracking and darkening of teeth. The dye used to create darker colas has a chemical that can bond with the enamel and weaken its shielding power. The dye also contains added glucose, which is known to have contributed to tooth decay.

Caffeine has different effects on each individual, but for many of us who drink Diet Coke for the energy boost its caffeine can cause harm, for example a 12-ounce can of Diet Coke contains 47 milligrams of caffeine -- a moderate amount for most people. But if you drink more than one can per day, or if your'e sensitive to caffeine, you may experience symptoms such as shakiness, dizziness, headaches, anxiety, abnormal heart rhythms and insomnia. Caffeine can also interfere with medications and supplements, including ciprofloxacin, norfloxacin, theophylline and echinacea. Make sure you and your child visit the dentist on a regular basis and limit your intake on coke and other sugary drinks. Share your top healthy drinks with other patients on our Facebook page.